Rice scoops Hammer of the Year 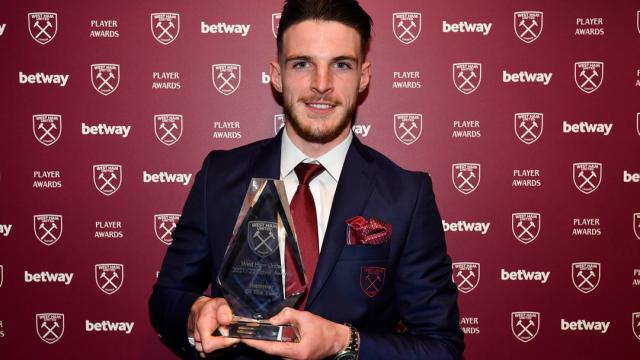 Declan Rice has been crowned the 2021/22 Hammer of the Year following an outstanding season again from the England international.

Rice won the award for the second time following a vote from fans, and he was delighted after what has been another memorable campaign from David Moyes’ Hammers.

“It’s too hard to sum up the season in one word, but one word is probably ‘proud’ because we’ve done so well as a team this year,” said Rice, “and that’s the standard and the bar that we’ve set and it has to be that every season.

“We’ve proved that we can play in big European games and our fans and our stadium have shown we can handle those big European nights, and that’s what we want more of.

“I’m proud of the lads because we’re not the biggest of squads, so to go week in week out again and again and again, training and playing Thursdays and Sundays, away from home and away from families has been tough, but in the end we’ve had a great year and we’re ready to go again.”

Hammer of the Year: Declan Rice

Goal of the Season: Manuel Lanzini (vs Crystal Palace A)

Save of the Season: Alphonse Areola (vs Sevilla H)

The Mark Noble Young Player of the Year: Ben Johnson