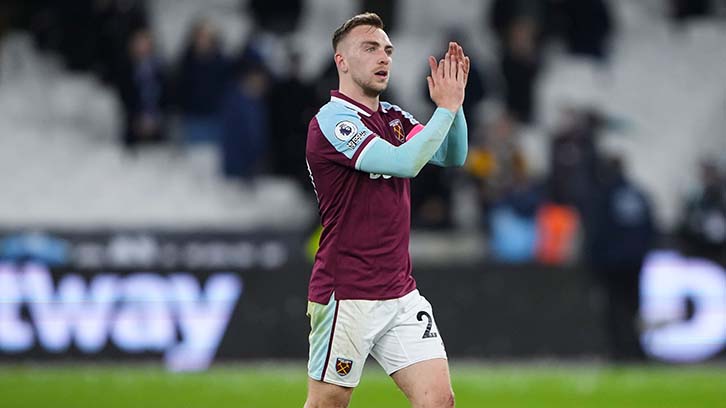 West Ham boss David Moyes has hailed Jarrod Bowens impact this season after the forward bagged a brace in the thrilling 2-2 draw with Manchester City on Sunday.

It was a day of high emotions, with Mark Noble rightly in the spotlight as he bid farewell to the West Ham fans in his final home appearance as player before retirement.

Out Hammers did not disappoint and gave Nobes a fitting send off with a performance that could have warranted all 3 points, although a draw was certainly one all connected with the club would have taken gladly before the match.

Jarrod Bowen was once again immense, grabbing 2 more goals to his haul of 11 this season, whilst showing another huge stride in his development as one of the feared forwards in the Premier League.

“I think Jarrod’s beginning to show a level of maturity which has gone up again,” stated Moyes.

“The way he finished the goals… he had another chance which got blocked which could have been a third goal.

“He’s beginning to get himself in a position where he’s beginning to score much more goals and he’s looking like a goalscorer for the team now, and someone we can go to, so I think his performances have improved again in the last month or so, and I’m really pleased for him.

“Hopefully what he’s doing will lead to an England call-up.”

Moyes introduced Noble to the encounter with the West Ham captain putting in a solid shift. However Moyes said it was a tactical decision and wasn’t driven by sentiment.

“Mark Noble is such a huge character,” added the boss. “He’s a huge personality and man around the Club. He takes responsibility.

“The biggest compliment I can give him is, to the last day, he has never switched off. He could have said ‘I’m coming to the end now’ but he kept it going right to the last minute.”