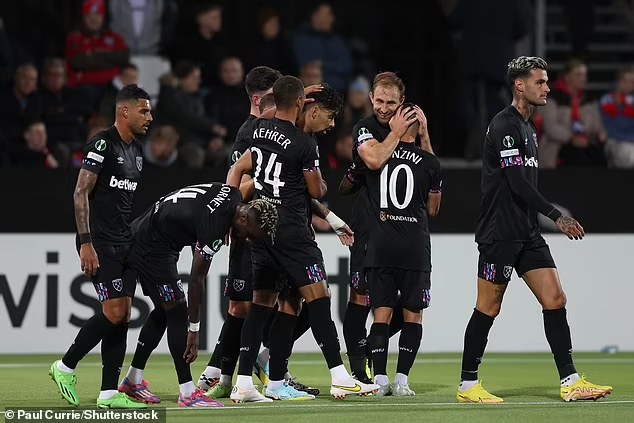 David Moyes was content but not thrilled about the manner of West Hams victory against Silkeborg in Denmark.

Our Hammers came away with a 3-2 victory to remain top of Group B in the Europa Conference League and looked to be cruising to victory for the vast majority of the match, however it ended a nervy affair with West Ham hanging on to claim the 3 points.

Despite David Moyes’ side looking dominant from the off, it was the hosts who took the lead on 5 minutes when Kusk wrong footed Areola to give Silkeborg a goal against the run of play.

West Ham responded well though and were level just 8 minutes later when Lanzini fired in a penalty after Cornet was pushed in the box, albeit somewhat soft.

Our Irons then ramped up the tempo and gained further authority on the game. New summer signing Scamacca made his mark on the game with a sublime goal.

The Italian picked up the ball on the edge of the area after some good play from Paqueta and Cornet, to fire a blistering shot into the roof of the net to give our Irons a deserved lead.

Then shortly before half time we had another when Dawson headed home a Cresswell corner to give West Ham a comfortable lead going into the break.

The second period picked up from the first with West Ham looking the commanding side however a switch of personnel shifted the proceedings when Paqueta, Scamacca and Rice were all replaced by Soucek, Benrahma and Bowen.

This was the moment our Hammers struggled to retain possession and ultimately lost confidence rapidly.

On 75 minutes the hosts got a goal back thanks to Tengstedt after the ball was given away cheaply by Bowen who again struggled.

The created a very nervy ending with West Ham having to hang on for the victory. It was achieved but there was a concern of the nature of how the game fell away from our control in such a swift fashion.

David Moyes was frustrated by the nature of the fall in performance and control, but ultimately was pleased that his side secured another victory in Europe.

“Look, for other parts of the game we were we were okay,” stated the boss.

“We played against a team who are very good at building up, their style is very good and passing is very good, and their rotation with it was good.

“But we’ve done a decent job for most of the game, and we had long periods when we were in control, but I’d have liked us to have got the fourth goal to put it to bed.

“Even at half-time, I thought they had they had showed some good things and that, if we weren’t careful, we could be in trouble. We were in control for most of it, and was only in the last ten minutes that it happened.”