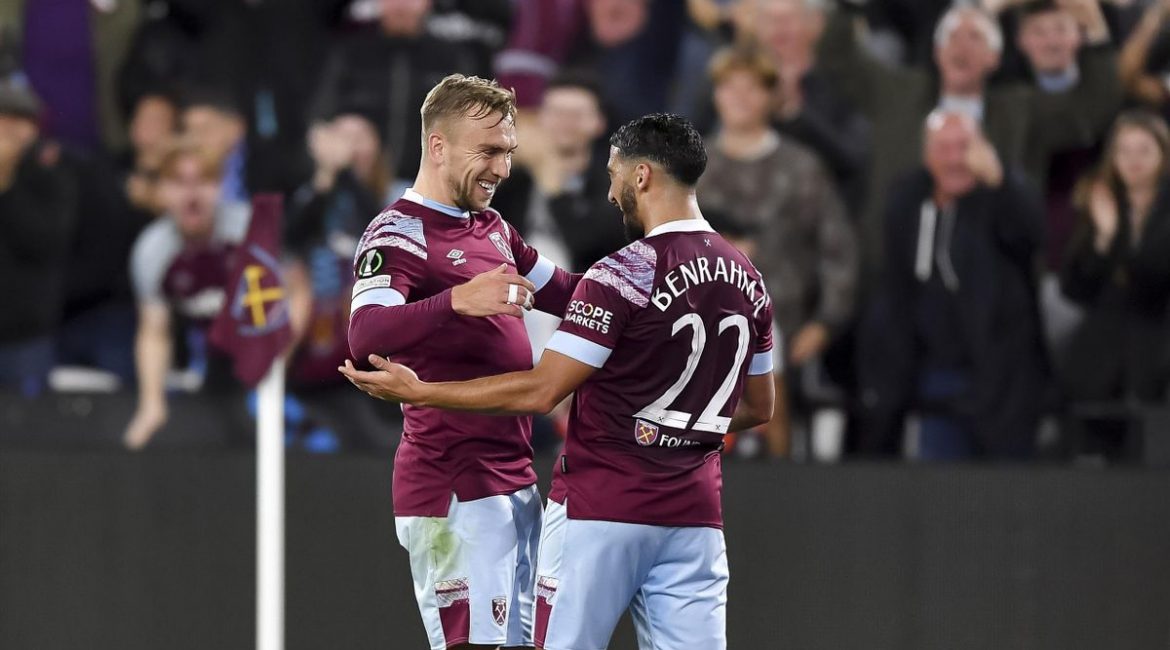 The Hammers boss was quite rightly delighted to see his side secure qualification into the next round of the competition, with top spot a mere point away with 2 games left to play in Group B of the Europa Conference League.

In what was a hostile atmosphere created by the travelling support, who’s frustrations with the proceedings boiled over with missiles being thrown throughout, West Ham produced a professional display on the pitch with the match always looking rather comfortable for our Hammers.

An early goal set the tone and it arrived in fashion with only 14 minutes on the clock. A free kick was rewarded 20 yards from goal and Said Benrahma, eager to take his chance in the side under Moyes, produced a stunning free kick that dipped at speed beyond the goalkeeper into the bottom corner to send London Stadium wild.

This set the tone for the remainder of the match with West Ham never really looking in trouble. However there was concern when Angelo Ogbonna signalled to the bench that he needed to come off, much to the worry of all concerned for the club, and was replaced by Craig Dawson on 22 minutes.

Shortly after West Ham added another, with a wonderful strike for the now in-form Jarrod Bowen, who looks back to his best, with a goal that will do no harm to his England World Cup chances this winter.

David Moyes’ side went into the break knowing that victory was in touching distance, with Anderlecht looking lost for ideas and offering no threat going forward.

The second half continued as the first left off, with West Ham looking comfortable and Flynn Downes again impressing and running the show from the middle of the park. It was again a performance that will have Moyes wondering if he should be alongside Rice this Sunday against Southampton.

Another injury concern West Ham arrived 15 minutes from time, when substitute Dawson having to leave the field, with a fear that we could be walking into a huge central defence crisis for fitness.

The visitors got a consolation goal via a poor penalty decision from the referee, with Ben Johnson pleading for VAR to review, forgetting the technology is absent for this stage of the tournament.

The match finished 2-1 which massively flattered Anderlecht, who was by far second best throughout the contest. Crowd issues continued which marred what was another fantastic European night for West Ham.

However, concern was in the air after the match over the fitness of both Ogbonna and Dawson, with all connected with the club eager to know whether or not the injuries sustained were significant.

David Moyes though was on hand to quell the fears, as he advised the media after the game that Ogbonna had just felt his hamstring was tight, and Dawson had suffered a dead leg – thus making it unlikely he’ll be available for Sunday.

It will be relief all round on the injury front to cap off an excellent night once again in Europe, with West Ham now into the next phase of the tournament in February next year.