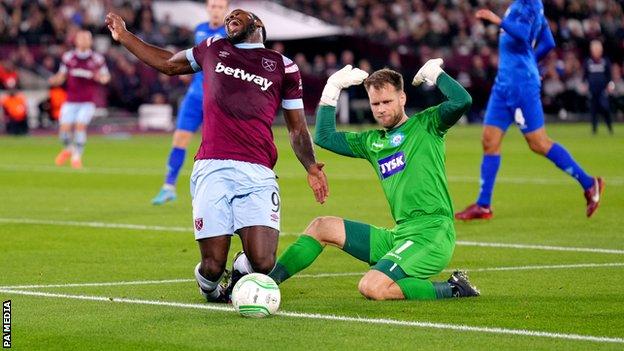 Following our Group B winning victory over Silkeborg at London Stadium last night, we got the thoughts on the performance and certain players from our fans.

It was ultimately a comfortable win, even if the scoreline didn’t quite reflect that, and one that means West Ham have a 100% record in the Europa Conference League this season as we have now qualified for the last 16 of the tournament.

The match also saw the return and long awaited competitive debut from summer signing Nayef Aguerd, with our fanbase delighted to see him in action after a 3 month lay-off, with many very impressed with what they saw.

Job done in 2nd gear. Quality 5 out of 5 wins. Dont want to see a first team player near that squad next thursday. Aguerd looks some player mind sweet left foot for a defender. ⚒⚒

Tonight will be remembered for the first appearance of Aguerd who was superb.

Aguard the star of the show for me. Defended well and always looking for a positive ball out to start a move forward.

A key issue this season which seems to be a running theme is our lack of potency in front of goal. Last night was another example of this according to many of our fans, when arguably the game could have been put to bed and made for more comfortable viewing.

Will we ever score from open play again?

I wouldn't call it a classic. Job done, top of the group, very good Aguerd, clean sheet and all that. The last third is still a problem, we should score more from open play.

Conor Coventry was given a rare start and to his credit produced an accomplished display, reminding David Moyes has has yet another talent ready to step in in the middle of the park when needed.

Aguerd is total class and personally the best of all the summer signings . Connor C , is s good player and deserves more playing time , he could be great . But overall I thought the final third we lacked ideas and poor finishing . Game overall was flat , no sparks . But we won 👍

Professional Job done,Coventry did well, Benny another good game but wish his final pass or Finnish was a lot better , Aguard good on his return and will be a great asset when he comes back from World Cup match fit,can’t fault the guys 5 wins out of five only team in the ECL

A good win for the hammers, boring game to watch with no open play goals. Antonio falling over was amusing, had his skates on, certainly not his shooting boots. Why was Benny taken off, he looked good, Connor played well, Ageurd classy, Areola was ace. Downes is top. Onwards