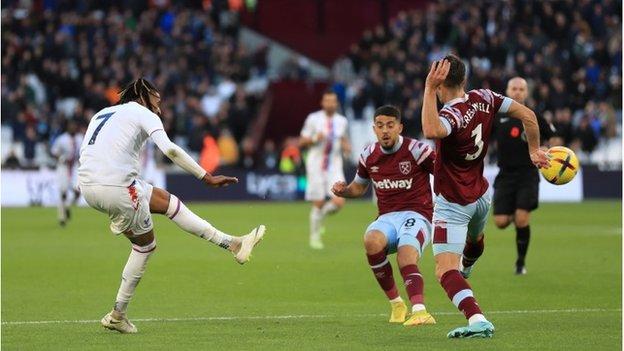 West Ham fell to a 2-1 defeat against Crystal Palace in a poor showing which our Hammers needed to win.

It was once again a match David Moyes’ side started slowly, a running theme that has come to bite West Ham throughout this season so far.

Palace looked the more threatening and energetic from the off with us chasing much of the proceedings in the first half, despite many key players rested in our midweek game in Europe.

Although West Ham were second best, we found ourselves in front with 20 mins on the clock, following a stunning strike from Saïd Benrahma completely against the run of play.

The visitors responded well though and were worthy of their equaliser right before the break, although Zahas goal was a complete gift following a awful mix up between Fabianski and Kehrer.

The second half continued in the same vain, despite Moyes ringing the changes, although many will question the decision to take off Gianluca Scamacca. The one change that did create a fierce response was Said Benrahma, who was replaced by Manuel Lanzini in the 64th minute which resulted in boos around the ground.

West Ham continued to play a counter-attack style with Palace far more better in possession overall. We then was awarded a penalty in the dying stages but it was overruled by the VAR.

With the clock ticking, West Ham broke forward with Antonio eager to get in a cross with many claret & blue shirts waiting, but a tame cross was easily collected.

Palace then broke and the ball fell to Olise, who’s deflected effort rose above Fabianski into the net to send all 3 points to South London, much to the fury of West Ham fans, having seen a number of games this season fall away and us leave empty handed.

A frustrating afternoon that will once again pile the pressure on David Moyes as he looked to get the best possible results from the remaining 2 matches in the League Cup and Premier League respectively, before the World Cup break.