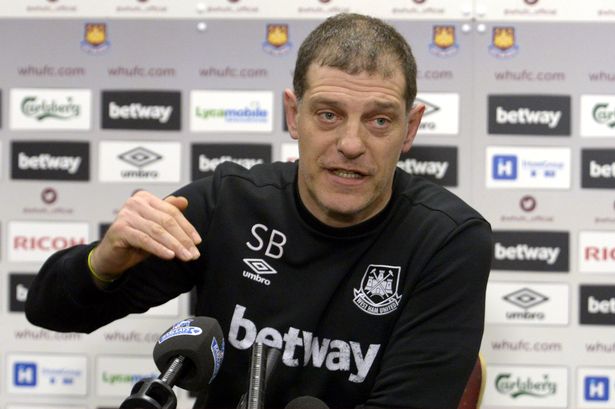 Can we talk about injuries, is Mikael Antonio fit?

Yes he is ready, he took part in a game last week which was part of the plan and he looks fit and ready to play, he has been training for two and a half weeks now.  He looks good and ready.

Kouyate and Andy Carroll started training yesterday as well, they have done a couple of training sessions.  We have to see with them because Andy has had a long layout and Kouyate has had a few weeks off as it happened in the first training session in Austria.  Lanzini is training separately and is joining in with the full squad on Monday.  We should have a full squad back for the Newcastle game.

Some harsh analysis after Manchester United?

You can’t say it is Man United and make excuses we should have done better, especially when it comes to the last couple of minutes.  We didn’t give up individually but we know that it is not very smart.  It is not the same if you lose 2-0 to losing 4-0.  I wanted to find the balance between criticising and talking about what went wrong but we don’t want to lose confidence because of one defeat.  We have looked good in training today.  We want to approach the game against Southampton in a positive mood, knowing what we have to do to get something positive out of the game.  Southampton are consistent, not with managers, but with the way they are playing.

What is the latest on William Carvalho?

I don’t know, we will see what happens with ins and outs it has become very busy at other clubs.  I have left it with the board and the chairman.  I concentrate purely on the matches.

Karen Brady said clubs are in favour of the transfer window closing early, are you?

Yes I would like that to happen we agree with them.  It has to be across the leagues otherwise there is no point.  Ironically it would put the clubs in a worse situation because you will still lose players if clubs from abroad do not have the same system.  It would only protect us that no other premier league clubs could take our players but it wouldn’t stop them from abroad.  For me it is a great idea, some teams are losing 30% of their teams and this makes it hard.  So it would be much better if the window stopped before the first game of the season and across Europe.

You mentioned Coutinho, similar with Costa, do you have sympathy with these managers because you had the same thing with Payet?

Of course I do, the new window would stop this when the season started.  It makes it hard to concentrate on games because the window is still open.  Sometimes you are on the other side of the story but definitely it doesn’t help the managers?

Do players have too much power?

What is important and gives you strength as a manager and a club is that you are on the same line as the chairman.  This is very important because then you as a collective group are more powerful, you have to be on the same line?

Has the balance gone too far to the players?

You know better than me but yes the power is too much on the power of the players and agents and it is hard for the managers but sometimes you are on the other end of it.  I never advise a player to stop training to force a move that is low and it shouldn’t be like that.

One positive was Declan Rice from the Manchester United game?

It is nice to have those situations, we never try to force it.  He is a boy, who is very mature for his age, who is very good for his age and is very mature.  He has got the quality and he impressed everybody-the West Ham family.  In preseason he played every game and he wasn’t in the plans in the beginning but he forced them.  It’s too early for the kid but he is improving and he is doing really well.  Definitely the reason, yes we had injuries, but he came on against Man United because I was confident he could do it instantly.  He came on against Burnley, last five minutes, it was an important game and it was 2-1 to us and we put him in because he was the best option.  I don’t want to praise him too much, despite his family are down to earth-he will stay focused.

Last season West Ham moved into a new stadium on the football side, Spurs move into a new one this weekend what advice would you give them?

We found it different and it was only us.  It happened to a few clubs who have moved stadiums.   There is no magic formula, last year Spurs found it hard at Wembley.  It wasn’t always against top clubs.  I am not too bothered to be fair.  They will need time to adjust.

Can I ask you about Joe Hart what impact has he had on the dressing room?

He has had a big impact, he is England’s number 1 and he is very vocal on the pitch and on the training ground.  He organises the defence and he shouts and we are very happy with him so far.  We have two really good goalkeepers.

Andy Carroll is back in training, is there anything he is doing different to avoid the constant injuries?

We are trying as a club and him personally.  It would be wrong to think of the World Cup.  Hopefully in 10 games we can build on that but unfortunately with a long lay out you can’t plan that long term.  Our aim is to find a solution that will make him long term fit.  For that you need him to start playing games.  We don’t want to rush him into a game against Southampton, even though he could have a big impact from the sub bench.  We don’t want to risk getting new injuries and we have to give him a short preseason before he enters the pitch.  Only that way could he try and stay fit and then he can think about England.

If Courtinho does leave for Barcelona are you worried that Liverpool will come for Lanzini?

Max emails me these stories straight away to shock me a bit.  We spoke about this before Manchester United, I speak to Manu every day, he is happy.  He feels at home, he feels liked.  You can see it, you don’t have to talk to him, and you can see by how he is smiling and is happy.  He broke into the Argentina national team. So he knows if he plays for West Ham he has a chance of getting a better contract with West Ham and playing for Argentina.

No I am sure he is going to stay with us.  He knows he is wanted, the chairman and the board, he was on loan, and we took an option before we had to.  He was voted the players player of the year, makes you feel wanted.  He likes it here.