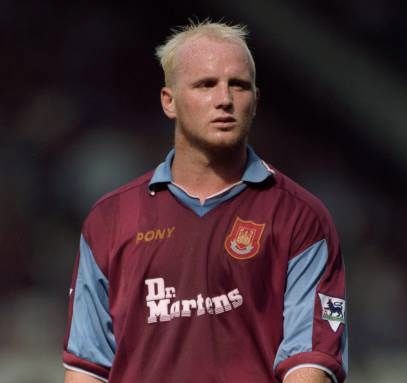 In out new latest feature with The West Ham Way official website, we shall be casting an eye back on our past, with write ups on players, managers and historic moments which our readers can indulge taking trips down memory lane.

Kicking off this new feature this week we take a look at one of my all time favourite signings from the late 90’s era, in Super Johnny Hartson, who fittingly is today celebrating his 47th birthday.

Hartson was signed by Harry Redknapp from Arsenal when the club was in the midst of a relegation dogfight during the 1996/97 season, and was brought in alongside Paul Kitson from Newcastle to help steer our Irons away from a drop to Division One from the Premier League.

His debut wasn’t one to remember, with the Welshman picking up a booking in a 1-0 defeat to Derby County. It was the following match, a home clash with rivals Spurs at Upton Park where Hartson’s Irons career took off, as he was on the scoresheet in an epic 4-3 win on a wet & windy night in East London.

He and Kitsons formidable partnership were pivotal that season, as our Irons ended up escaping the drop and managing to finish in a respectable 12th place, despite us sitting in 18th when Hartson signed.

The following season saw John become one of the hottest strikers not only in West Hams Premier League history, but the league itself, as he managed to net 24 goals in all competitions and lead West Ham to an 8th placed finish.

That season he finished runner up to the Golden Boot award, finishing behind Manchester United’s Andy Cole.

Sadly this form couldn’t be replicated in the next campaign, as Hartson simply lost his way at West Ham, with his form suffering and then making the headlines for kicking teammate Eyal Berkovic in training, which effectively was the beginning of the end of Hartsons time at Upton Park.

Hartson was sold by the club to Wimbledon for a club record fee of £7.5m, but his time there was blighted by injury and he couldn’t prevent the South London club from relegation.

His career was looking rather stale, with a move to Coventry proving underwhelming, however a move to Scottish side Celtic was a perfect fit for the Welshman, who went on to become a key player for the The Hoops, and then spent 5 years there scoring a total of 88 goals in 146 appearances.

Hartson did carry on playing after leaving Celtic, with spells at West Bromwich Albion and Norwich, before he called him on his playing career in 2008.

It was a shock to the football world when it was revealed that Hartson had been diagnosed with testicular cancer, which had also spread to his brain and lungs, with the former Hammer in critical condition.

In Hartson fashion though he battled on and in December 2009 it was announced he was cancer free and has since continued with his media career as a respected pundit.

Although he was only at the club for a relatively short period, his time with West Ham was immense, with some outstanding displays and goals that helped bring some fantastic memories to us Hammers fans, especially when arriving and help steer the club from relegation.

“I’d like to think that I was good for the Hammers,” said Hartson. “Along with new signings ‘Kits’ and Steve Lomas plus all the other lads, I’d played my part in that survival and, the following season, my 24 goals helped us get to two cup quarter-finals and finish eighth in the Premier League. I’d got on with everyone and it was a really good year for us.

“Then, I had that unsavoury incident at training and things changed. Everyone saw what happened between Eyal and myself after I’d tackled him from behind, but I took full responsibility and apologised. The crowd had turned a little bit, too, because my form wasn’t that great and, psychologically, I was struggling to settle back in.

“Looking back, Harry Redknapp might have thought that I’d shot my bolt and, with Wimbledon offering £7.5 million he was doubling his money, meaning that he’d be able to sign three players, Paolo Di Canio, Marc-Vivien Foe and Scott Minto, overnight.

“I wished I could’ve stayed at West Ham for a bit longer, but circumstances dictated and you can’t bring back the past.”