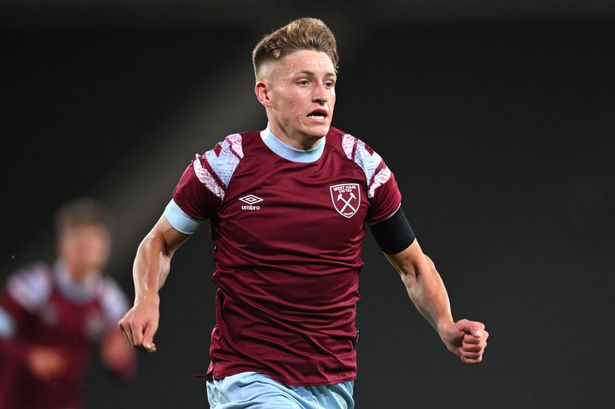 West Ham have announced the signing of a hugely talented Academy player, one that news of our interest was first broke by The West Ham Way.

Calum Marshall, who signed from NIFL Premiership side Linfield in January this year, celebrated turning 18 this week by penning his first professional contract having impressed many at the club since his arrival.

The forward has already notched 9 goals in just 14 appearances for the clubs U18 side, and has already featured for the U21’s – having scored his first at that level a few weeks ago over Blackburn Rovers.

ExWHUEmployee reported exclusively back in December 2021 that the club were keen on landing the highly sought after striker, and The West Ham Way are delighted that the player has gone on to impress to land his contract at the club.

Marshall, is understandably thrilled to have landed the deal and is looking forward to the future ahead in East London. “Signing my first professional deal with West Ham United feels really good,” Marshall told the clubs Official Website. “It’s something that I’ve been working towards my whole life.

“My 2022 has been very enjoyable and has also had its peaks and troughs. I’ve just been trying to replicate my form from the U18s into the U21s, and it’s been a hard step up. I’m on my way back from an injury too so, for me, it’s about getting as much game time as I can with the U18s in the coming weeks, and hopefully do well.

“Now it’s time for me to push on. I need to keep my foot on the gas and keep going forward. I’m so happy to sign my first professional deal and now I want to try and get back into the U21s team after the World Cup.”

“I know Callum’s efforts have caught the eyes of West Ham United fans,” said Brown. “In his short time with us already and everyone in the Academy is eager to see him continue to grow and develop throughout the rest of the 2022/23 season and beyond.”