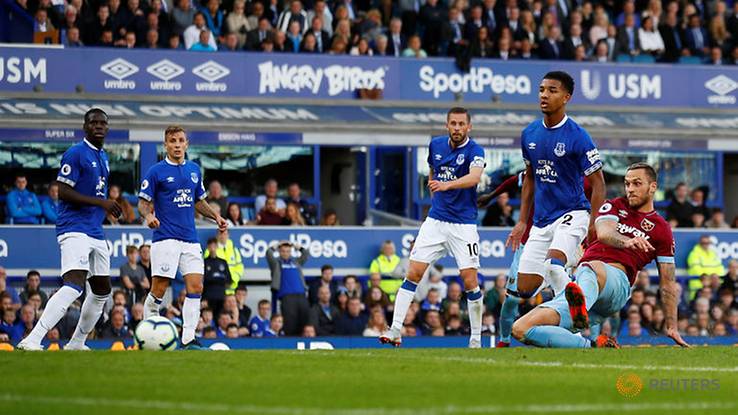 Lukasz Fabianski: Another solid display from the Polish stopper, who could do nothing to stop Sigurdsson’s fantastic header. Given the defence’s susceptibility from crosses, Fabianski’s willingness to claim the ball is a simple but vital quality that Adrian has always lacked, and this is perhaps the main difference that proves the ex-Swansea man was a key signing in the summer. 8/10

Pablo Zabaleta: In his second start of the season, Zabaleta once again showed that he’s an integral member of the squad. Presumably drafted following Ryan Fredericks’s woeful performance against Wolves, the Argentinian posted his claim to be the first choice right-back, ably supporting Yarmolenko in attack whilst looking secure defensively. 7/10

Fabian Balbuena: Another largely solid display from the Paraguayan, with his distribution and ability on the ball growing each week. His reading of the game is superb, and he times his tackles well, forming a nice partnership with Diop in the process. There is still a clear weakness when defending crosses, as proven by his inability to contest with Sigurdsson for the goal, but this looks to be a fault of the high-line rather than his aerial ability. 7/10

Issa Diop: Like his partner in the heart of the defence, Diop was relatively assured in all aspects of his game, with exception to wide crosses. Given the Frenchman’s stature, surely it would be a better ploy to sit deeper than attempting to play an offside trap. By stepping up so high, his height is being negated, resulting in opponents either gaining a run or having acres of space to pick their target; aside from the goal, both Niasse and Tosun spurned great opportunities, and it’s an aspect of defending that Pellegrini must address on the training ground. 7/10

Arthur Masuaku: One of the quieter afternoons for the Frenchman, but that’s not necessarily a bad thing; whilst more muted in attack, he was caught out far less times defensively. Though it can be argued it’s his job to stop the supply from wide positions, it’s unfair to say he should block every single cross, especially when Everton were largely ignoring the centre of the pitch as a viable attacking route. His ability to run with the ball was evident in the closing stages, as he ate up valuable seconds and gained territory; unspectacular but pretty solid overall. 6/10

Declan Rice: After struggling immensely at Liverpool on the opening day of the season, Rice’s return to Merseyside was far more successful. He shielded the centre backs exquisitely, regularly filling in for either Balbuena or Diop when they were dragged wide. Tenacious in the tackle and economical with the ball, Rice performed exactly how a defensive midfielder should, with his position in the pivot being flexible enough to switch to a three at the back whenever required. 9/10

Mark Noble: After a difficult start to the game, in which he uncharacteristically gave the ball away on numerous occasions, the captain eventually acclimatised to proceedings and battled hard even when his passing game was off a little. Despite his lack of mobility, he still possesses by far the biggest football brain in the team, and his awareness to a stray Pickford pass created the second goal. He won free kicks in good areas, gaining territory and stemming any momentum Everton had. Whilst he’ll have better days with the ball at his feet, he rallied the team behind him and acted as a captain should. 7/10

Pedro Obiang: One of his best games in West Ham shirt to date; peculiarly, he was the most advanced of the midfield three, but it worked effectively for the whole game. His simple lofted ball set Arnautovic away for the first goal, but it was his link-up play with the Austrian for the third goal that really caught the eye. He worked tirelessly in the middle of the park, and whilst not blisteringly quick, he escaped his marker on a few occasions, showing he is at least a portion of the answer to the midfield mobility problem. The key now is to build on this performance, something he has rarely done in his time here to date. 8/10

Andriy Yarmolenko: A fantastic full debut for the Ukrainian, whose first-half display was as good as anything we’ve seen since Payet departed. His first goal was largely indebted to the good work of Arnautovic, but his second was a sublime strike that proved to be unstoppable. Aside from his two goals, his all-round play was superb, linking up well with both Arnautovic and Noble, with his guile on the ball negating his one-footedness. Though he faded a little in the second half, he had already made his mark on the game and helped the team gain a valuable win. 9/10

Felipe Anderson: Whilst not as influential as in the previous away game at Arsenal, Anderson looks far more comfortable when afforded the space that he’s been denied at the London Stadium. His vision and ability to produce accurate first-time passes is crucial, and his flick to create a shooting opportunity for Obiang was beautifully subtle, but his unwillingness to run past the full-back remains a bit of a mystery. His first instinct is to pass, a good trait for someone playing more centrally, but on the flank he is a peripheral figure There are signs of quality there, but a greater balance between passing and direct running would be welcomed if he is to stay on the wing. 6/10

Marko Arnautovic: Only Liverpool’s Mohammed Salah has been involved in more goals this calendar year than Arnautovic, a testament to his consistency in a largely inconsistent team. He bullied Holgate for the whole contest, holding up the ball exquisitely and giving the side a platform to build on. Some fans have bizarrely said the Austrian is selfish, an accusation he quashed when squaring the ball for Yarmolenko when clean through, and he sets the tone with the relentless pressing at the top of the pitch. He deserved his goal, capping off a fine move with Obiang, but his niggling injury remains a concern. So far, he has returned to play each time, but one would wager it will eventually take its toll. 8/10

Michail Antonio: In my eyes, Antonio’s best performance in a West Ham shirt came when playing up-front at Anfield two years ago, and there were signs that a display of that quality is not far away. He held the ball up effectively, including a scarcely believable run down the left-hand side, and gained the team territory, contributing to a reasonably sedate end to the game. Though he spurned one decent opportunity, his job was to simply help the team see-out the game, and he managed this effectively. 7/10

Carlos Sanchez: The only blot on a good all-round display from the team. When replacing Noble, he seemed hell-bent on allowing Everton to come back into the game, getting caught dawdling on the ball twice within a matter of minutes, much similar to the manner in which he allowed Wolves to score in the last game. Thankfully the team suffered no consequences from his poor performance, and it remains to be seen if he’ll learn from his mistakes. 3/10

Robert Snodgrass: A brief cameo for the Scotsman today, but he retained possession well and even managed to outpace an opponent. Like Antonio, he grafted to quell any Everton pressure and proved to be the correct substitution for the excellent Yarmolenko. 6/10